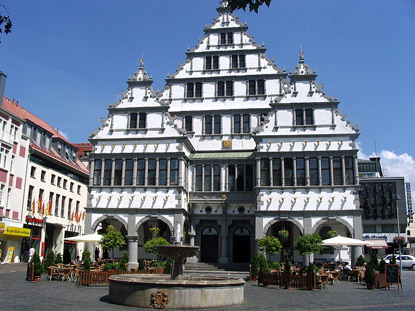 Paderborn is a young, dynamic city with a history of more than 1,200 years. The city is proud of its traditions and its noteworthy past which can be discovered in many locations and numerous historical buildings.

Among the many interesting landmarks are, the City Hall, the reconstructed Imperial Palace, the City Cathedral with its famous Three-Hares-Window (Drei-Hasen-Fenster), and the Pader springs.

Sister Cities International was founded as a Presidential initiative by President Dwight D. Eisenhower on September 11, 1956 at the White House Conference on citizen diplomacy. The intent was to create more community-led global relationships so people of different cultures could appreciate their differences and build partnerships.On July 15, 2016, Sister Cities International celebrated 60 years of global citizen and civic diplomatic action, helping to support a future where the world's cities, communities, and citizens can come together in common ground. The celebration commemorated the significant impact the organization has made in building bridges across nations, cities, and communities around the globe to create and sustain world peace. Read Belleville's Sister Cities International Day Proclamation.